Contributed by Jennifer Self, Director, CSUB Public Affairs and Communications

You feel the electricity before you catch the first glimpse of her: Hundreds of people – students, professors and community members, many of them inspired to activism by their hero – are on their tiptoes, craning their necks to find a seat in the crowded auditorium, exchanging their favorite quotes and stories, clutching her books. The anticipation feels more like the charge in the air before a Beyonce concert, rather than a traditional ethics lecture. Then you hear the first shout: 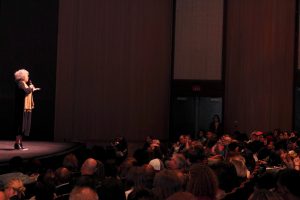 And that’s when you turn your head in the general direction everyone else is looking and see Dr. Angela Davis, belying the rock-star welcome she’s receiving, casually making her way down the aisle, water bottle in hand, to the stage.

“It’s not often I can say I’m visiting a campus for the first time,” the activist and scholar told the audience, noting she has spoken at hundreds of colleges since her 1972 release from prison following her acquittal on conspiracy, murder and kidnapping charges.

“I thought (then) that maybe I would do this two or three years, people will forget. … But here we are, how many decades later?”

Dr. Davis’ first visit to CSU Bakersfield, for the 33rdAnnual Charles W. Kegley Memorial Lecture on April 11, prompted a rapturous response from the crowd, including the usually unflappable CSUB Provost and Vice President of Academic Affairs, Dr. Vernon Harper, who told the audience he “nearly fainted when she walked by 30 seconds ago.”

Between the 600 seats in the Dore Theatre, the overflow seating in adjacent rooms and the livestream viewership, Dr. Michael Burroughs, director of the Kegley Institute of Ethics, estimated the audience at about 1,500 people.

“It is the largest attendance I have seen at a KIE event since I started in 2017,” Dr. Burroughs noted.

Dr. Davis, 75, started her lecture the Angela Davis way: By going off script.

“Education or Incarceration?: Activism and the Prison-Industrial Complex” was the title of the lecture, and though the UC Santa Cruz professor emerita did explore those themes, she warned the audience there would be detours.

“I’d like to focus on the relationship between gender violence and prison abolition,” she said, before covering a litany of subjects: the marginalization of transgender women of color, the abolition of prisons, and the satisfaction that comes from living long enough to witness your views, once denounced as radical and un-American, become widely accepted – even mainstream.

“It’s a wonderful time to be young and learning. But it’s a good time to be old. You see the work you’ve done your whole life is finally mattering.”

During recent congressional testimony by the president’s former personal lawyer Michael Cohen, Dr. Davis said she learned what Rep. Tlaib was made of when the Michigan congresswoman challenged Rep. Mark Meadows after the North Carolina Republican introduced a woman of color who once worked for Donald Trump – proof, the congressman said, that the president could not be racist.

“The exchange was so typical of the national discourse on racism,” Dr. Davis noted. “Meadows turned red and said, ‘Is she (Tlaib) calling me a racist? I can’t be a racist. I’m friends with Elijah Cummings, the black head of the (House) Oversight Committee.’

The prison-industrial complex is part of the problem because it funnels public money away from social programs and institutions, Dr. Davis said.

“Forget about schools. They focus only on discipline in schools so that schools become prep schools for prisons and teach them how to be prisoners. Metal detectors, school resource officers, the school-to-prison pipeline.”

The imposition of lengthy sentences, some of which extend beyond the natural life of the prisoner, is a way of “forgetting about the problem we have to solve.”

“Imprisonment produces a kind of amnesia to a whole host of social problems. Once a person is sent to prison, we can forget about them.”

Dr. Davis challenged the men in the audience to join women in the fight for gender equality.

“These movements have primarily been women’s movements. I think it’s about time men take the lead.

“All these male conversations. The vocabulary used to describe women. How many men feel the responsibility to challenge that when women aren’t looking?”

Dr. Davis concluded her lecture by taking questions from audience members, some of whom shared their personal stories of struggle after being released from prison. Two students said they were in Project Rebound, a CSUB program that supports the success of the formerly incarcerated.

“Would you do it again?” CSUB student Alexandra Thomas asked Dr. Davis.

“My answer would be ‘absolutely!’”

As the audience roared its approval, Dr. Davis continued:

“What might have appeared to have been a very difficult moment in my life – my time behind bars – I now see as a gift. … I don’t feel like I’ve sacrificed anything. It’s been a wonderful life.”