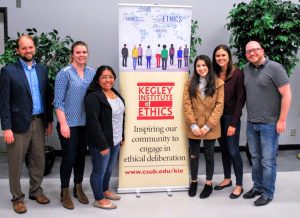 Hopes were high, and the questions were difficult! On March 20th, the 6th Annual CSUB Ethics Bowl – a competition in which students evaluate and discuss ethics cases and receive questions from a panel of judges – was hosted by CSUB Campus Programming and the Kegley Institute of Ethics. A big thank you is due to all the wonderful teams that participated in this year’s Ethics Bowl, and a huge thank you to the judges who also helped make this event possible.

Here’s a quick insight on the teams as well as the ethical topics that were discussed at the 6th Annual Ethics Bowl. 6 teams of CSUB undergraduate students competed, including:

Only four teams (those with the highest scores) advanced from the first round of the competition: Team M. D.; Facts, Logic and Superior Power; The Queen Bees; and The Theories of Power. The first ethical questions were: “Is it ever ethical to ‘out’ someone? When is it unethical?” and “Is it unethical to arrest low-income people who have not paid fines? Why or why not?”

With both teams verbally dueling, the judges had a difficult time deciding a victor. With one of the closest possible draws in history, winning by only 1 single point, Team Theories of Power claimed victory for the 6th Annual Campus Ethics Bowl. 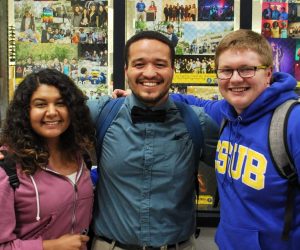