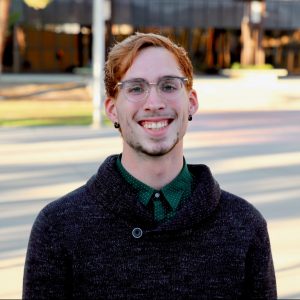 Contributed by KIE Student Assistant, Josiah Youngblood. You can access a re-broadcast of Ashley Blaine Featherson’s April 23rd lecture (available through May 5) here.

Ashley Blaine Featherson delivered an inpiring lecture to our community on April 23rd, 2020. Ashley let us have a glimpse into her life as an actress, singer, and producer. Starting out in Gaithersburg, Maryland and now living in Los Angeles, Ashley has been in numerous projects, such as playing the ambitious and smart Joelle in the series Dear White People. Ashley described her life for us, all the way from the beginning of her story to the present sharing numerous insights into how she has dealt with failures and hardships, explaining her mentality in the face of trials and tribulations.

When Ashley was growing up, she explained “from the moment I could walk and talk, I always knew that I wanted to pursue a career in entertainment.” Ashley had the support of her parents and sister growing up as she pursued her career and eight months after receiving her Bachelor’s Degree of Fine Arts in Musical Theater at Howard University, Ashley’s god sister offered her a place to live in Los Angeles. Ashley didn’t waste a moment. Buying the ticket to Los Angeles that same night, Ashley remembered  how people would say “you’re so brave”. But Ashley clarified that it wasn’t until later in her life that she realized what that bravery truly meant. The only way to get where she wanted to be was by “having the courage and the guts to go after it with everything you’ve got.” Continuing to explain her understanding of bravery, Ashley noted that no matter what age, job, or place you are in life, “don’t be afraid to take that step.”

In order to accomplish her success, Ashley illustrated that she needed both her family and friends’ support, but also added: “I also believed enough in myself to take the big leap.” “The trials that you go through,” Ashley noted, “are the same things that are going to lead you to your triumphs.”

Ashley also explained how she manifests an attitude of always facing situations with gratitude. In order to build gratitude and find a foundation, she dove head first into the concepts of Legacy, Heritage and Ancestors, asking herself “Who am I and who do I come from?”. These questions lead Ashley to research her ancestors, which gave her a new perspective on her role as a human-being. Reflecting on this, she said: “I am a descendant of people who have endured things that I can’t even imagine.” Knowing that she is her “ancestor’s wildest dreams” gave Ashley a sense of purpose and meaning. After looking into her ancestors’ history, Ashley started thinking about her personal legacy, too. She wants to leave behind a legacy not only for her family but for young women of color to strive and succeed.

Ashley also discussed the importance of finding your purpose,  something that “is always bigger than you” and that leaves a legacy. In addition, part of her purpose is to open doors and leave them cracked for others. No matter what age you are, Ashley believes that you should find a purpose. Building off of the idea of purpose and passion, Ashley discussed access and privilege and that when we help a person who may be behind us, we benefit everyone as a whole by promoting more access than was previously available. In Ashley’s case,  “young woman and young woman of color” are who she has focused her legacy on, explaining how if she is not leaving access behind for them then she doesn’t feel that she is fulfilling her purpose.

One insight that I took away from Ashley’s talk is that if you are feeling like you don’t inherently accept yourself or you feel lost and confused, take the time now to reflect on yourself and make your own personal discoveries. Ashley shared a powerful quote by Rico Love that really encapsulates how she is personally dealing with these turbulent times:

“to everyone who was about to begin a new, exciting journey before this pandemic struck, to everyone who just signed a new contract, record deal, production deal, or got a new job;  to everyone who was on their very first tour; to all of those who had checks coming in that are now delayed or even canceled I have this message for you. In aviation, holding is a maneuver designed to hold an aircraft already in flight while holding it in a specified air space. This could happen for a number of reasons. Too many planes on the runways, high winds, or even mechanical errors.  But regardless of the reasoning, the intent is to make sure that the plane does what it was originally set out to do. Which gets you to where you’re going. Don’t be one of those passengers who rants and complains about what you or no one around you can control. Instead be the passenger who folds the blanket and adjusts their seat  to the upright position. Be the passenger who puts on their shoes and prepares themselves for the arrival that they’ve been waiting on. You’ve been patient and diligent for this long, this too shall pass. This plane shall land, look out of the windows into the clouds and smile.”

Ashley closed her talk by bringing out her Gratitude Jar, a jar that she uses each day to write a note about something for which she is thankful. At the end of the year, Ashley goes through the jar and spends time being thankful for everything that has happened. No matter how small the thing was that made her thankful, she will always write a note each day to add in the jar.

Lastly, Ashley showed what she called a Manifestation Board. This poster board includes cut-outs of quotes, goals, and pictures, that Ashley wants to manifest within herself, explaining how manifesting something will eventually lead to its fruition. Whether you are creating your Manifestation Board in private or with friends, Ashley recommends that while adding to your board, make sure to really allow yourself to understand and feel what the things you are adding.

Check out the original lecture video at KIE to get the full scoop on Ashley Blaine Featherson and “Turning Your Trials Into Triumphs”!