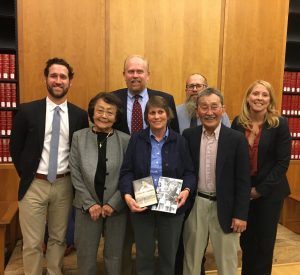 On January 30th, the Kegley Institute of Ethics and the CSUB Public History Institute hosted “Executive Order 9066: The History, Legacy, and Lessons of Japanese Internment.” You can read a recent article about the event in the CSUB Runner here

The event began with a screening of a short film, “Stand up for Justice: The Ralph Lazo Story,” based on a true story of a Mexican-Irish American high school student in Los Angeles who voluntarily interned with his Japanese friends. Following the screening, Mary Higashi, a college student forced into internment at the Colorado River Relocation Center in 1942, will be interviewed by Bakersfield High School’s archiving instructor, Ken Hooper.

A discussion on Japanese internment by these panelists concluded the event: