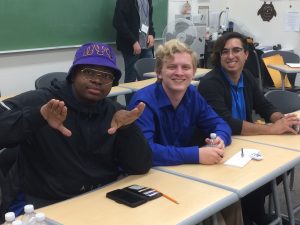 The CSUB Ethics Bowl Team recently competed in the California Regional Intercollegiate Ethics Bowl competition at Cabrillo College. Our team won rounds against Occidental College and Chapman University, tied New Mexico State, and narrowly lost a final round to Chico State.  That left the team just short of qualifying for the national competition, to be held in March 2019 at the Association for Practical and Professional Ethics Conference.

We are incredibly proud of the three members of our team: Andrew Bolich (Philosophy and Psychology double major), Dubrea Sanders (Political Science major and Philosophy, Communications, and Psychology minors), and James White (History major and Philosophy minor).  All the hard work they put in over the course of the semester showed at the competition as they skillfully argued a wide range of topics, including the idea of transracialism, legal requirements for Amish midwives, the ethics of tax havens, and restrictions on Kosher and Halal practices in Belgium.

Over the last few weeks, the team has also engaged in home and away scrimmages with Bakersfield College’s new Ethics Bowl team. We look forward to continuing that collaboration in the future.

Tremendous thanks to Dr. Nate Olson, who serves as coach for and main organizer of the CSUB Ethics Bowl Team and Initiative.