Both the local community and nation continue to debate issues of immigration, detention, and family separation as refugees enter the United States seeking asylum, economic opportunity, and safety. Kern County is intimately connected to this debate through the Mesa Verde Detention Facility, an Immigration and Customs Enforcement (ICE) processing center, located in downtown Bakersfield. 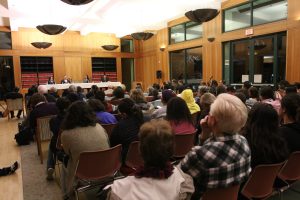 With the aim of informing our community and engaging in respectful discussion on immigrant and refugee detention, the Kegley Institute of Ethics and the California State University, Bakersfield (CSUB) Pre-Law Society hosted an expert panel and community conversation titled “Immigration Behind Bars: Activist, Legal, and Education Perspectives” on February 13, 2019. The focus of this event was on three key areas of impact: the education and well-being of immigrant children, legal elements and barriers that affect the immigration process, and information on detainees and detainment in the Mesa Verde Detention Facility.

The panel was moderated by Micah Nilsson, committee co-chair of the CSUB Pre-Law Society and attorney at Dowling Aaron Incorporated, and included three panelists:

Several key points were made in this panel. Adam Sawyer spoke first on education, pointing out historical instances of government sanctioned family detainment and separation, citing Ellis Island, Angel Island, and the removal and placement in boarding schools of Native American children. He also focused on the short and long term educational and socio-emotional implications of children’s separation and detainment, including trauma, resilience, and the need for children to be reunified with a loving and nurturing family.

Speaking next, Ambar Tovar, who represents clients detained at the Mesa Verde Detention Center, addressed the increase in immigration enforcement that has added to an already overwhelming system of detained immigrants and asylum seekers. This further exacerbates the shortage of legal counsel for detainees, forcing many, including children, to appear in court without representation. Additional barriers highlighted were a lack of access to evidence and resources to support cases, high dollar bail amounts, and overcrowding in detention facilities, with 45,000 beds nationwide and over 48,000 immigrants detained.

Jeannie Parent, co-founder of KWESI (Kern Welcoming and Extending Solidarity to Immigrants), was the final panelist, focusing on local efforts to assist those detained in Mesa Verde and, also, to share detainee stories. Many detainees suffer from anxiety and depression due to their isolation at these facilities, having no friends or family in the area. KWESI’s goal is to end isolation for those detained at Mesa Verde and also to advocate and support them along the way. The panel ended with information for those interested in getting involved. KWESI trains volunteers on visitation protocols and also accepts donations of luggage, travel items, and monetary support.